What were Tyrannosaurus Rex's arms for?

This particular post doesn't relate to myths, legends or folklore, but this blog also covers subjects that are interesting, bizarre, and uncertain... So, back to the popular scientific question that is yet to be answered for sure: What were the Tyrannosaurus Rex's arm for?

I know that this is one of those topics that will only be left for calculated guesses, hypothetical notions, theories, random opinions and ideas, but it is just a fun post that will hopefully get some interesting feedback, later on. I'm just curious what other people think about the tiny arms that resemble twigs, that are found on the mighty T. Rex... Personally, after giving it some thought, I think it is fairly simple as to why the arms were so small, but I'll get to my petty opinion in a moment.

First, I'll list some of the ideas from scientists and regular people like us, as to what the reason may be for Tyrannosaurus Rex's undeveloped arms and/or what they may have been used for:

The small arms braced the beast's body as it stood up? Well, I've wondered before how it slept - if it laid down, leaned on large objects, squatted, etc.

The small limbs are vestigial; the arms have degenerated and lost their use.

The small arms with razor sharp claws were used as meat hooks while feeding? Well, this sounds plausible, except I have to ask: With a set of teeth like that and vicious jaw strength, did they need little meat hooks, too?

To add to the confusion, it has been believed by some who studied this concept, that the arms of the Tyrannosaurus Rex were very limited in motion, often broken, healed, then fractured and mended again - throughout its lifetime, which leads to the assumption that they spent a lot of time without even using them.

---Personally, since it is thought that the first several years of T. Rex's life was at a much slower growth rate until about the age of 14, I think that the arms had much more use for the young version of T. Rex. Basically, the younger this dinosaur was, the more use it probably got out of those little limbs with claws. And, over time, as the Tyrannosaurus Rex grew to its monstrous size, the limbs were basically useless and just sort of shrivelled and dwindled into what appears to be little twigs from a big tree trunk.

In conclusion, I think the small arms are perfect for the T. Rex. Nature seems to have an awesome way of providing the best way, and I think this design, selection, evolution, or however you want to say it, was the best for this beast. For example, its large tail wasn't for the sake of saying, "hey, look at how big my sexy tail is." No, it was used for balance. I'm sure it could also be used to whip into an opponent, as well... ouch!

Back to the arm subject: I mean really, just because the Tyrannosaurus Rex couldn't use his/her arms to scratch its backside or play with its genitals, doesn't mean that they were totally useless its entire life. Like I said before, maybe this dinosaur needed those limbs early in life, but not so much later on. Plus, can you imagine this giant meat-eating dinosaur with big swinging arms? It would've had to have a completely different body structure to support two massive arms... Ha-ha! I think people forget, we are not talking about Godzilla or King Kong here, we are talking about a well-balanced beast created by nature, not by our imagination for use on television.

Anyway... compare your ideas with others, think, ponder if you wish... If you come up with a theory for the anatomical reason for T. Rex's small arms versus big body ratio, that isn't already listed on this post, feel free to drop it into the comment field. 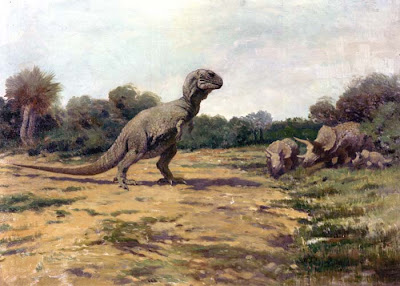 Other Dinosaur Related Posts from the M.L.F. Blog:

Were Dinosaurs Cold-blooded or Warm-blooded?

---End of Post "What were Tyrannosaurus Rex's arms for?"
Posted by Obscurely Diverse at 1:31 AM