How can you have a blog about myths, legends, and folklore without at least some mention of the boogy-boogy, hocus-pocus medicine men or shamans who practice the art of shamanism?

Well, regardless of fact or fiction, the role of the shamans are very respected in many traditional societies and whatnot. These medicine men/women or Shamans act as ritual leaders and healers. They are said to be able to connect with the spiritual world in a way that most cannot. Basically, they are the able to talk and get in touch with spirits, ghosts, or any other entity that you can't see or prove to exist, and they are sort of like messengers caught in between the real world of mortality and the spirit world of immortality or however you want to define it.

Speaking of such things, outside of medicine men/women and shamanism, there are many folks who claim to be able to get in touch with the spirit world. With so many people who claim to have these "special" abilities and with so many people making money off of these claims, writing books, etc., who knows who is for real anymore? That's why many folks just say the whole concept of shamanism is hooey, and don't think anymore about it.


A good example of people faking this talent for profit: Have you ever watched the movie "Ghost," starring Patrick Swayze and Whoopi Goldberg? Whoopi was the one in that movie who could talk to the dead by using her psychic ability and inner woo of wacky wooism. However, in the movie, she was just faking her ability for being able to communicate into the spirit world - so she could make some easy money off the gullible, desperate people who lost loved ones and family members, except for one day and to her surprise, she actually got contacted by a spirit and it freaked her out as this particular ghost wouldn't leave her alone until she helped him. Ha-ha! Overall, it was a good movie, and worth watching.

Well, I've sort of drifted from the original topic, but oh well. Actually, the chatter about the movie Ghost was more interesting to me, but anyway...


Shamans are colorful, creative little devils, oops, I mean people, as they often use rattlers, gongs, and other interesting things during their act of healing and contact with the spirits. Shamans also perform exorcisms, and their contact with the spirits helps them stop the harm caused by malignant, bad, evil spirits and, in turn, gives them the power to cure illnesses and to see into the future, and so on. Hmm, this reminds me, my last girlfriend's mom thought I was an evil spirit and was all about trying to separate us for the majority of our relationship. I wonder if she was acting as a medicine woman and would do chants into the spirit world while shaking a wicked rattler and beating on some mighty divine gong? Nah, she probably just had a voodoo doll that she would stab with needles while thinking of me; ha-ha! In fact, that same person is the very reason why I wrote the "Holier than Thou Christians are Pathetic!" post, a while back.


Okay, after thinking about that, my mood has now shifted from mythical madness to a rational realist, so I'm done talking about this subject of Medicine Men, Shamans, and Shamanism. If you're seeking more information about this subject, just go to Wikipedia and do a search over 'shamanism' or go to your favorite search engine and begin there.

Hey, look below; it is a depiction of a mighty Shaman hitting the lovely gong as he beckons the spirits from the unknown: 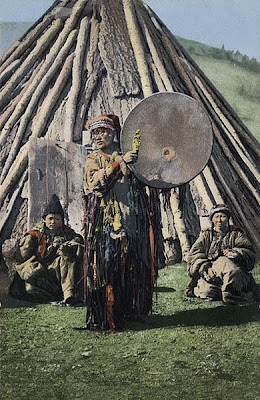