The famous mythical sea serpent known as the "Lock Ness Monster," is a quintessential example of cryptozoology at its finest. In case you don't know, cryptozoology is the study of animals that has not yet been proven to exist - basically meaning, the study of hidden animals.
I remember as a kid, watching interesting television shows that were speaking about these mysterious creatures such as the Ogopogo and the Loch Ness Monster. Even back then, I was very skeptical but also had an open mind to the possibilities of the unknown. In fact, if it wasn't for the fact that we still don't know that much about sea creatures that may exist in some of the deepest parts of the ocean, I would just blow all of this off as creative baloney. BUT, since the ocean is so vast and deep, who knows for sure what all dwells down there? The same applies for these supposed sea monsters and mythical lake creatures. I don't know; I haven't went scuba diving in all the areas of the world (none, actually - ha-ha!), but regardless, whether they exist or not, the Loch Ness Monster and the Ogopogo must not make their self public very often. Hey, why should they?
Anyway, the Ogopogo or Naitaka ("lake demon") is the name given to a cryptid lake monster reported to live in Okanagan Lake, in British Columbia, Canada. Ogopogo has been allegedly seen by First Nations people since the 19th century. The most common description of Ogopogo is a forty- to fifty-foot-long sea serpent. It has supposedly been photographed and even been caught on tape. [Wikipedia] "British cryptozoologist Karl Shuker has categorized the Ogopogo as a 'many hump' variety of lake monster, and suggested it may be a kind of primitive serpentine whale such as Basilosaurus. However, because the physical evidence for the beast is limited to unclear photographs and film, it has also been suggested that the sightings are misidentifications of common animals, such as otters, and inanimate objects, such as floating logs. Another suggestion is that the Ogopogo is a lake sturgeon (like other sturgeons, this species is an evolutionarily ancient bottomfeeder with a partly cartilaginous skeleton and skin bearing rows of bony plates)."
Some sightings of the Ogopogo, resemble the ancient, aquatic reptile of the past, Plesiosaur, as depicted below: 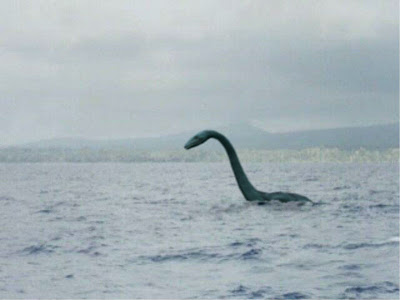 "The Loch Ness Monster (per Wikipedia) is a cryptid that is reputed to inhabit Loch Ness in the Scottish Highlands. The most frequent speculation is that the creature represents a line of long-surviving Plesiosaurs (as mentioned prior, when speaking about the Ogopogo). It is similar to other supposed lake monsters in Scotland and elsewhere, though its description varies from one account to the next (ain't that the way it usually is?). Popular interest and belief in the animal has varied since it was brought to the world's attention in 1933. Evidence of its existence is anecdotal, with minimal and much-disputed photographic material and sonar readings (you can't hardly trust or believe anybody anymore). The scientific community regards the Loch Ness Monster as a modern-day myth, and explains sightings as a mix of hoaxes and wishful thinking."
You know, it is a shame that it is always hard to sort out what is real and what isn't, with all the crap a person has to sort through. Hmm, I bet the field of cryptozoology can get a bit aggravating, at times... At any rate, without all the "sea monster" titles or whatever, I think the main question is, when it comes to this type of subject: is there still ancient creatures alive today from the Dinosaur era? If we'd leave all the sea serpent drama and "monster in the lake" talk for the big screen, then maybe we could sort out and analyze what little evidence we may have of these creatures still existing today, without all the confusion. But then again, I suppose all the exaggerations and fictitious stories about these sea demons, adds a little excitement to the mix.
Anyway, if you'd like to read a lot more about the Lock Ness Monster and other modern-myths like the Ogopogo, I'd start on this page here: http://en.wikipedia.org/wiki/Loch_Ness_Monster
Who knows what all may thrive below the water's surface out there? 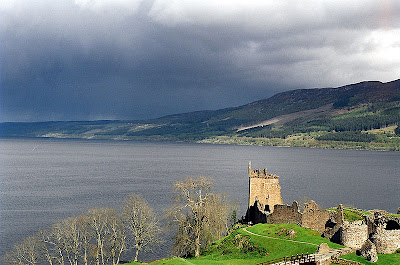