These half human/half fish creatures are commonly talked about in mythology & folklore...

Mermaids are usually portrayed as extremely attractive beings that often lure men to their underwater homes - hence the reason why I referred to them as the "aquatic femme fatales."
In mythology, mermaids often sing, enchant, seduce, and sometimes accidentally kill humans while trying to save them from drowning. I assume when they try to take other men down to their underwater kingdom, that they often forget that us human folks can't breathe while being totally submerged, so even more "accidental" casualties may be involved.
Of course, the male version is called "merman." With that being said, those underwater wenches need to stick to their merman and leave the Homo sapiens alone! Ha-ha!

Humorous tidbits: There have been "claimed sightings" of dead & living mermaids from places such as British Columbia and Java (an island of Indonesia), for example.

There have even been "claimed sightings" as far north as Canada, from the area of Vancouver and Victoria - one sighting was reported between 1870-1890, and the other was from 1967. Canada? Man, just imagine how cold that water is! Even though it sounds ludicrous, if it was true, I bet those mermaids had some very erect nipples in those frigid waters!

In August 2009, the town of Kiryat Yam in Israel offered a monetary prize of $1 million for anyone who could prove the existence of a mermaid off its coast, after dozens of people reported seeing one of these mythical, aquatic femme fatales leaping out of the water like a dolphin and doing aerial tricks before returning to the depths. Needless to say, the massive monetary prize has not yet been awarded. Ha-ha! 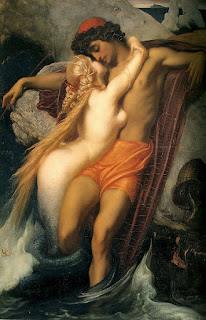 ---Side Note: If you're ever out fishing and you see one of those crazy-ass, half human, mermaid bitches jump out of the water, and you have a story to tell, feel free to come back to this silly blog and post your asinine comments. LOL! ;)

---> 'Click Here' to search for DVDs related to Mermaids