In mythology, you'll sometimes find hybrids that represent 2 creatures into one entity.
A couple good examples of these types of mystic beings are the Satyrs & Centaurs. Another fanciful form of hybrid beings, that I've recently did a post on, is the lovely Mermaids.

The Centaurs, in Greek Mythology, were mythical hybrids that are part horse and part human. Where the horse's neck would be, is where the humanoid upper torso began. Symbolically, these human-like horses (Centaurs) would have had the strength & endurance of a wild beast along with the cognitive function of a wise human. 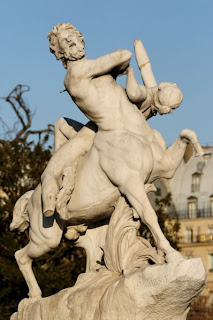 The Satyrs dwelled within the woods & mountains, and most mythologies depict them as half goat and half human albeit some images seemed to add a longer tail that resembled more of a horse. Many of the depictions I have seen thus far of the Satyrs, often display them with an erection. By what I've read, from various sources, they sound like a bunch of damn partying little devils. The Satyrs are mischievous in a sly way; they are also very horny & lewd, boisterous & loud, and like to get drunk often. Hmm, this sounds like a scenario that we, nowadays, refer to as a "guy's night out on the town." Ha-ha! 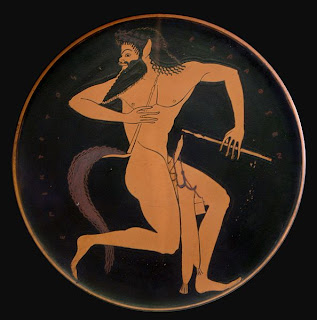 ---End of Post "Satyrs & Centaurs - Mythical Hybrids"
Posted by Obscurely Diverse at 4:24 AM