On this post, I'm going to provide a few additional resources that relate to Greek Mythology and other various types of symbolism. There is a lot of information on these subjects by way of the world wide web and via books. I'll just list a few, but the promo goes out to one in particular - since I'm currently reading it...... 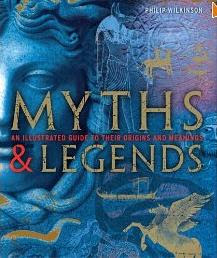 The image above, depicts a book that was wrote by Philip Wilkinson (one of his many works). It is an illustrated guide to the origins & meanings of Myths & Legends.
Below, I'll provide an excerpt from the book cover:
"Myths and legends are integral to all cultures. Their narratives, themes, and characters address and provide answers to eternal questions: where do we come from, how do we live, what do we believe in? This fascinating book explores the major myths and legends across the world, from Classical mythology to Eastern beliefs, and from American legends to African folk tales. The stories are retold in compelling detail, while key aspects of each myth are considered: their meaning, purpose, and power; the main characters, and their importance to modern culture."
Anyway, this book has loads of detailed illustrations, information, and covers a broad range of topics, such as: creation, death, afterlife, and so on. It is very concise, in my opinion, and it doesn't waste a lot of time on petty detail. It is an overall excellent resource, when it comes to learning about the subject matter.
"Old myths, old gods, old heroes have never died. They are only sleeping at the bottom of our mind, waiting for our call." ---Stanley Kunitz, Poet
Myths & Legends Illustrated Guide/Book @ Amazon:
---------------------

Additional books from Amazon, titled "Gods, Heroes, and Monsters: A Sourcebook of Greek, Roman and Near Eastern Myths in Translation" and "The Complete World of Greek Mythology"......


---End of Post: "Myths & Legends, Mythology - Books
Posted by Obscurely Diverse at 7:49 AM No comments:

Poseidon was the "god of the sea," in Greek Mythology, and is often depicted as a bearded man holding a trident while being aboard a chariot that resembles a shell - being pulled by sea horses.
Poseidon was not only known for bringing violent storms at sea, he was also notorious for bringing earthquakes to the land and was touted as being one of the most powerful gods of Mount Olympus. But, his greed for additional power, ended up leading to a dispute with the goddess Athena.
Athena & Poseidon both wanted to control the city of Athens, so they had to compete...which was a competition that involved who could provide the best gift to the people of Athens.
The other gods from Mount Olympus judged the event, and later, Zeus declared Athena as the victor. Hence, the city was named Athens.

After losing the contest, Poseidon was irate, livid and enraged to the fullest. This led to the "coming of the flood." The Sea God took his mighty trident, heavily striked the sea numerous times, caused a great storm, which ended up flooding the city of Athens. After the flood waters finally, after a long period of time, subsided, the Athenians repaired their city and built a temple - to represent Athena. They also made offerings to Poseidon, to appease the Sea God they recently disgruntled and/or enraged to fury. 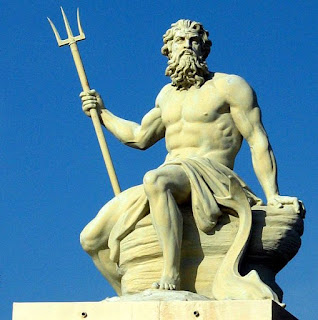 Temples to Poseidon at Sounion, could be seen from far out at sea. 2 rows of columns, still stand today...... 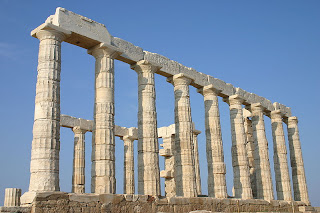 ---Other (less powerful deities) Sea Gods the greeks worshipped: Triton (half fish/half man), Proteus (wise, ancient one of the sea), and Glaucus.
Posted by Obscurely Diverse at 4:53 AM 2 comments:

The God of Thunder - Zeus - Battle of the Titans

As the son of the Titans Cronus and Rhea, Zeus was the god of thunder and the sky. Zeus was married to the Goddess Hera. Even though he was married, Zeus was also well known for his sexual conquests of other goddesses and various mortal women.

He is mostly famous for his personal weapon, the "thunderbolt" (lightning) - a gift from the Cyclopes; it was more or less a token of appreciation after Zeus helped release the Cyclopes (among others) from their dungeon in Tartarus (underworld region). Tartarus is a deep, gloomy place...better described as a murky pit or an abyss - used as a dungeon of torment & suffering (sounds like hell) that is located beneath the underworld.

By releasing the Gigantes, Hecatonchires, Cyclopes, and the brothers of Cronus from Tartarus, and after leading the gods into their victory over the Titans during the great Cosmic War, he became ruler of the Gods. The "Cosmic War" is also known as Titanomachia, Titanomachy, War of the Titans, Battle of Gods, Battle of the Titans, or simply "Titan War." Myths state that it was a long battle, in which the gods of Mount Olympus gained control of the universe by defeating the Titans and sending them into the underworld.

The mighty "Zeus" only used his personal power sporadically, as he typically left his influential work towards humans, for his children. His children had great power over the mortal earth dwellers at the time.

Editor's Comment: Mythology is more interesting when viewed in a symbolic way, albeit it does make a person wonder: How many times has life started & ended on this planet; how many times has Gaia been exploited by other forms of life, mighty giants, visitors from other planets, and any other race that is currently considered bizarre & outlandish to most of the poorly evolved minds and currently dwelling Homo sapiens?

Zeus was the supreme ruler of Mount Olympus and of the Pantheon of gods who resided there. Being the supreme ruler, he upheld law, justice and morals, in which this made him the spiritual leader of both gods and men. Zeus was a celestial god, and originally worshipped as a weather god by the Greek tribes... Read more: http://www.pantheon.org/articles/z/zeus.html

In Greek Mythology, the Battle of the Titans took place for ten years; a series of battles fought in Thessaly between the two races of deities - before the existence of mankind. Read more: http://en.wikipedia.org/wiki/Titanomachy

---End of Post "The God of Thunder - Zeus - Battle of the Titans"
Posted by Obscurely Diverse at 9:10 AM No comments: