I recently read an article over a newly discovered species of humans that could have performed a few interbreeding activities with some our ancient ancestors. It goes on to say:
"Scientists say an entirely separate type of human identified from bones in Siberia co-existed and interbred with our own species. The ancient humans have been dubbed Denisovans after the caves in Siberia where their remains were found. There is also evidence that this group was widespread in Eurasia. A study in Nature journal shows that Denisovans co-existed with Neanderthals and interbred with our species - perhaps around 50,000 years ago." Read more, here: http://www.bbc.co.uk/news/science-environment-12059564

This reminds me of a few years ago, when they discovered a dwarf-like humanoid/chimp called the "Homo floresiensis." There was lots of debate there, and some people thought that it was a dwarfed version of the evolving humanoid, but later they started to see that the evidence led to what I originally thought a few years ago, and that being it was a separate species all together. By what I read and seen back then, when it first hit the media, the Homo floresiensis was more closely related to a monkey than anything else. I just looked at it as an advanced midget ape with keen survival skills, and stumbled along into something else without giving it much thought. I just don't waste time pondering over trivial stuff.

Anyway, back to the original subject concerning the Denisovans: What makes this so mysterious, is the missing link between Homo Erectus, Neanderthals, Denisovans (the ones spoke about in that article link) and the Homo sapiens (the species of today). It seems that all the other species quickly disappear after the Homo sapiens arrived to this beautiful scene hosted by planet Earth. Some folks get creative and even go as far as saying that aliens from another planet came down here and altered the DNA of the Homo Erectus by interbreeding it with more advanced beings or by performing genetic alterations by using some advanced form of science, to create the Homo sapiens. Then again, you'll have the creationists battling the evolutionists in what is or isn't possible.
I must say, though, when it comes to macro-evolution theories, their concepts of speciation do seem to be quite asinine, to say the least!

At any rate, when it comes to today's humanoids, the interest levels over subjects like this, often splits into 4 groups:

1) Scientists, 2) Religionists/Creationists, 3) Creative open-minded thinkers, and 4) the ones who just don't give a crap either way, as long as they got plenty food to eat and various forms of entertainment at hand.

I once wrote about a related subject, here:  "Theory of Evolution: Where is the Missing Link between Homo erectus & Homo sapiens"

At times, when researching the origins of life and our ancient ancestors, it can be perplexing and hilarious all at the same time. At any rate, no one actually knows for sure just what all could have happened in the past, but it makes for some excellent debate, arguments, stories, and science fiction tales or flicks. ...Hey, I just thought of a movie that sort of relates to this subject, well, in an inverted way. Ha-ha!

---'Click Here' to Search for 'Planet of the Apes' DVDs 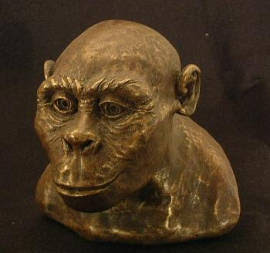 ---End of Post 'Interbreeding Species of Ancient Humans'
Posted by Obscurely Diverse at 6:46 AM