Disclaimer: This blog may contain affiliate links. I may receive a commission if you click a link and purchase something within this site. As an Amazon Associate I earn from qualifying purchases.

I'm about to briefly bring up two debatable topics, provide links to a couple related stories, and leave it at that. Nobody seems to know for sure, what caused the ultimate demise and/or extinction of the Neanderthals nor can anyone prove exactly what killed off the dinosaurs. First, we'll start with the Neanderthals: 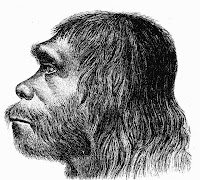 Wikipedia lists two possible Extinction Hypotheses: 1) Neanderthals were a separate species from modern humans, and became extinct (due to climate change or interaction with humans) and were replaced by H. sapiens moving into its habitat beginning around 80 kya. Competition from H. sapiens probably contributed to Neanderthal extinction. Jared Diamond has suggested a scenario of violent conflict and displacement. 2) Neanderthals were a contemporary subspecies that bred with Homo sapiens and disappeared through absorption (interbreeding hypothesis).

Here's a third possibility: Could the Neanderthal women have been sterilized by aliens from another planet or world?

"But they were an obsolete race, competing for food & living space with the much more advanced Cro-Magnon man, our own ancestors. They had to be removed, and were genetically altered by the ancient astronauts so that they could no longer breed. In other words, the women were sterilized," says UFO & ancient astronaut expert Dr. Hans Oehlenschlager of Berlin, Germany.

It was an interesting story, nonetheless...

Okay, now what about the death of those Dinosaurs?

Scientists along with many other curious folks have been wondering this very question, "what actually caused the Dinosaurs to all die out?" While most folks agree that their ultimate demise was due to some giant meteor impact to planet Earth, there are still many other theories out there......

"Years of research by dedicated scientists across the world have yielded many conflicting theories, all of them plausible; but they do agree that the wonderful lizards perished in some kind of worldwide, cataclysmic, and incredibly violent event; and several have asked: Could this have been a nuclear explosion via atomic war?"

Read more: http://www.perpendicularity.org/death-of-dinosaurs.html [Link is no longer active] Well, either way, they are extinct, so draw your own conclusions...

Posted by Obscurely Diverse at 4:48 AM