Unlike most of the content here, this is not a Myth nor does it relate to Legends or Folklore.

The only thing mythical about it, could be if someone seen one of these characters running around with extreme Hypertrichosis, while thinking they just witnessed a malign being, and screamed, "I seen a Werewolf!" Now that could get some wild stories started in a hurry, that would later turn into Myths & Folklore.

I'll make this post fairly short, but mainly just wanted to drop down a few images of this bizarre syndrome and to also possibly inform the ones out there who have never heard of it. Anyway, Hypertrichosis obviously involves abnormal hair growth. It can either be over the entire body or it can be localized in certain areas. The Werewolf Syndrome is also often classified under "Acquired" Hypertrichosis (which appears after birth) or "Congenital" Hypertrichosis (which is rare, but present at birth due to a genetic mutation).

Check out a couple images below: 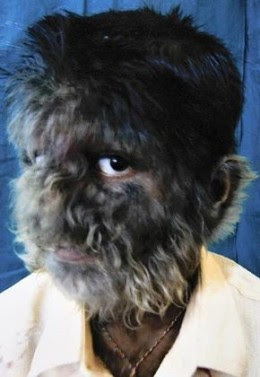 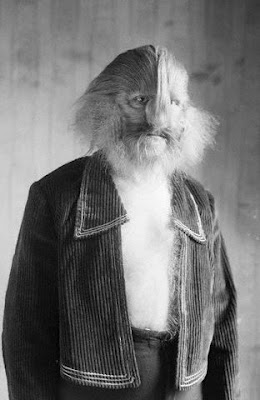 I have read about how some people in the past that suffered with extreme Hypertrichosis, often found jobs at the circus, but can you imagine the mental stress one would have to go through, if they wanted to fit in with society... In contrast, I have also read that some people with this particular syndrome attempt no treatments, and say that it defines them as a person and/or who they are. Either way, this is some freaky-looking stuff!

Posted by Obscurely Diverse at 7:29 AM