...Just as there have been many various types of civilizations throughout time on planet Earth, there have also been many different gods worshipped by the dwellers therein. The Incas were known to be "people of the sun" and they were also very into the notion of "Sky Gods," as well.

This sort of stuff just reminds me of how people think without knowing a science behind things. I'm not saying that there isn't a force or a higher being or beings behind some things, but then again, what is so mysterious about that? Hell, I'd hate to know that the Homo sapiens on planet Earth are the most advanced race in the universe. Now that's a scary thought... Ha-ha!

Anyway, if a person didn't know any better and they heard a loud thunder, for example, what else would they have thought back then? The same applies to lightning and all the other creative activity that happens in the sky, hence forth the "Sky Gods" in full mythical force.

The Incas main divinity, as far as existence is concerned, was Viracocha, and was the great creator god in the pre-Inca and Inca mythology in the Andes region of South America. Viracocha was one of the most important deities in the Inca pantheon and the Incas believed that this deity was the creator of all things, or the source from which all things derived from, and this particular Inca god was also associated with the sea in an intrinsic fashion. Obviously, the ancient Incas believed that Viracocha created the universe, sun, moon, stars, time (by commanding the sun to move over the sky) and civilization itself, as would most people who worship creator gods under any name. 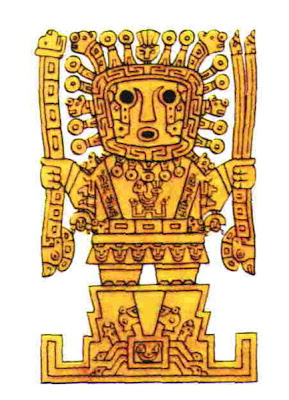 Inti was the Incan sun god, the ruler of the daytime. This may have been the most important god of the Incas, as far as daily living is concerned, for very apparent reasons (we all need the sun, ya know...).

Mama Kilya, also known as Mama Quilla, was the moon goddess and ruler of the night. One could say that the Incas looked at Inti as the divine male and Mama Kilya as the divine female. Also, they represented Inti with gold and Mama Quilla with silver.

Illapu, also known as Illapa, was the Incan thunder god. Illapu was also known as the provider of rain, and they often prayed for such things, since rain is a necessary thing, duh......

I just read in a mythology book that mentioned some deity called "Chuichu." It said that the Incas believed in a rainbow god that was a two-headed dragon-like deity called Chuichu. They knew that the rainbow somehow related to the sun or the sun's rays, but due to the lack of understanding back then, which is understandable, they couldn't figure it out - so why not just label it as a god, since it is simpler to blame it on a god-like being, ya know... 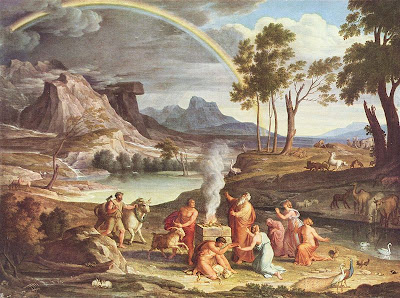 Posted by Obscurely Diverse at 8:42 AM