...Found within the southern part of the Northern Territory in central Australia, this particular rock formation is very sacred to the aboriginal people. Ayers rock, also known as "Uluru," has many caves, springs, ancient artwork, waterholes, and so on. The Aborigines believe that the rock caves found inside the Uluru, have spiritual significance.

This mighty sandstone has been weathered over time, but still stands 1,142 feet above the plains and is an incredible 5.8 miles around (the circumference). Ayers rock often seems to change color, depending on the angle of the sun, with its most attractive moment being during sunsets, as it often appears to glow red.

Image of the Uluru, below: 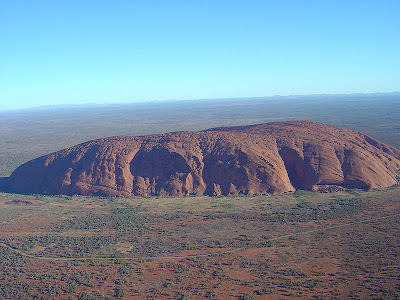 As with most subjects that deal with ancient times & history, the Sacred Ayers Rock comes with many myths & legends.
For example: The sacred Uluru is in the middle of the Simpson Desert. Even though it appears to just be a giant land mass in the middle of a desert, the Aborigines think of it as a symbol of all creation.
There is an Aborigine legend that Uluru was once an ocean, but after a great battle at its shores, it rose up in revolt at the bloodshed, forming the great blood-colored rock that you often see glow red, during sunset, like I mentioned before.

Every feature on Ayers Rock has a special meaning to these people, such as: a pair of holes are the eyes of an ancestor; a mark down the side is the blood of the "venomous snake people," shed in a battle, and on and on and on......

As you can see, I'm stopping right there and I'm not about to get into all the myths, legends, and folklore that spawned from the Uluru - as this post would become too large.

Australian Aboriginal Proverb: "We are all visitors to this time, this place... Our purpose here is to observe, to learn, to grow, to love and then we return home."

At any rate, I just wanted to drop down a couple images of this sacred, massive chunk of a rock formation, as it is still very interesting to look at...... 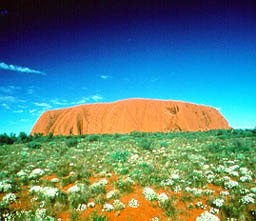 ---Side Note: If you're interested in traveling and/or taking a vacation near this sacred rock formation, visit: http://www.ayersrockresort.com.au/ - Ayers Rock Resort website says: "With over 65 tours, local activities and attractions within the Resort and the Uluru-Kata Tjuta National Park, your days will be action-packed. Ride a camel across the desert dunes. Hop on a Harley, or embark on a base walk of Uluru (Ayers Rock)."