Of course, all ancient pyramids seem to have a touch of mysterious construction to them, but none compare to the great pyramids of Giza...... 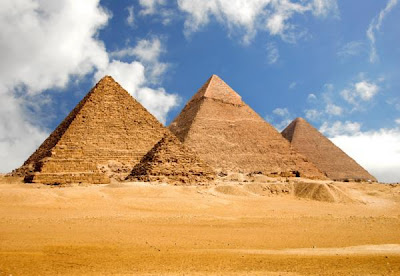 Are these merely symbolic constructions of star worship, or is all that effort for diverse reasons and divine purposes? Either way, they are still magnificent and a pleasure to look at, even after all these years. They have withstood the test of time and one can only imagine how glorious they shined, long ago. I have read somewhere before, that they used to emit a bright white glow.
But the question still remains, when it comes to these mysterious, great pyramids of Giza: How did they build 'em? Below, I'll provide a few links that relate to this subject, along with a Wikipedia link for further reading.
So, what's your theory? Were the people of Ancient Egypt simply more advanced than what many of us give them credit for? They definitely were not lazy, unlike the typical Americans of today. Ha-ha! Here's another common question: Did they get help from extraterrestrials and/or aliens that came from another planet, region in space, time, dimension or from a completely different universe? Ahh, the queries we often ponder......
Related Links:
"In partially solving a mystery that has baffled archaeologists for centuries, a Drexel University professor has determined that the Great Pyramids of Giza were constructed with a combination of not only carved stones but the first blocks of limestone-based concrete cast by any civilization." Read More: http://www.sciencedaily.com/releases/2006/12/061209122918.htm
"The Aztecs, Mayans and ancient Egyptians were three very different civilizations with one very large similarity: pyramids. However, of these three ancient cultures, the Egyptians set the standard for what most people recognize as classic pyramid design: massive monuments with a square base and four smooth-sided triangular sides, rising to a point. The Aztecs and Mayans built their pyramids with tiered steps and a flat top." Read More: http://www.sciencedaily.com/releases/2008/03/080328104302.htm
"Many alternative, often contradictory, theories have been proposed regarding the pyramid's construction techniques. Not all agree even that the blocks were quarried. Davidovits claims that they were cast in situ using a "limestone concrete," a theory which is rejected by other Egyptologists. The rest accept that it was built by moving huge stones from a quarry, being unable to agree only on whether they were dragged, lifted or even rolled into place." Read More: http://en.wikipedia.org/wiki/Great_Pyramid_of_Giza
Image of a massive, mysterious pyramid from Giza: