Were the Dinosaurs Cold-Blooded or Warm-Blooded?

I was recently discussing this interesting subject with a friend of mine, several days ago, after I did my "Death of the Neanderthals & Dinosaurs" post. Anyway, I know that it has long been said within the scientific community that all of the Dinosaurs were cold-blooded creatures, but I just don't think that it is possible for ALL of them to have been that way. I've never really checked on it or researched it, nor was I even aware that it was a debatable topic, until a couple days ago. Simply put, the cold-blooded theory may very well just be a misguided myth.


...After thinking about it, I went and did a web search and within a few seconds, I found an article on an established, trusted website, talking about this very issue. It was a 2 page article; both pages are not very long, so it doesn't take but a moment to read. First, lets just skip page one for now and head right into the Pros & Cons on page 2: http://dinosaurs.about.com/od/dinosaurcontroversies/i/warmblooded_2.htm

Okay, I hope that you have read page 2 already and are ready to move on... On page one, it states that the weakest argument in which supports the theory of cold-blooded dinosaurs is: "Since modern reptiles and lizards are cold-blooded, it made sense that “lizard-like” creatures like dinosaurs must have been cold-blooded, too." It also goes on to say: "This received view of dinosaurs began to change in the late 1960s, when a handful of paleontologists, chief among them Robert Bakker and John Ostrom, began to promulgate a picture of dinosaurs as fast, quick-witted, energetic creatures, more akin to modern mammalian predators than the lumbering lizards of myth. The problem was, it would be extremely difficult for a Tyrannosaurus Rex to maintain such an active lifestyle if it was cold-blooded -- leading to the theory that dinosaurs may in fact have been endotherms." To read more from page one, visit:


I didn't even realize it was debatable, like I said earlier, until just a few days ago. Personally, I'm in between the two conflicting theories of warm-blooded versus the cold-blooded claims, and I think that there were both types of creatures back then. I have to agree with the prior statement, though, and that being it would be difficult trying to imagine a T. Rex, for example, being anything but warm-blooded. I think many scientists just want to believe they were cold-blooded because it is easier to accept - since dinosaurs are known and often labeled as "giant lizards."


It is very possible that we will never know the actual answer to any of this, and due to the outlandish differences in the creatures of the past from the ones of today, who is to say that they couldn't have somehow been designed or born with a unique metabolism that is unknown to us - featuring facets of both warm- and cold-blooded traits. Maybe they had the ability to turn on a self-induced, cold-blooded, internal hibernating switch when slowing down the metabolism was necessary for survival, and then have the ability to awaken to a hyper-active, high-calorie burning, warm-blooded eating machine when possible - who knows?

Any theory is about as good as the next, within reason, when speaking about the unknown. It is an interesting subject... If you have any personal theories about the mighty Dinosaurs of the past, feel free to drop them down into the comment field. 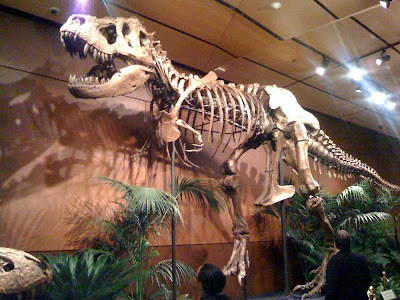 ---End of Post "Were the Dinosaurs Cold-Blooded or Warm-Blooded?"
Posted by Obscurely Diverse at 4:43 AM