The Mahabharata... Fact or Fiction?

The Mahabharata is one of the longest poems in the world and is one of the two major Sanskrit epics of ancient India, the other being the Ramayana. This particular epic is part of the Hindu history.

Besides its epic narrative of the Kurukshetra War and the fates of the Kauravas and the Pandavas, the Mahabharata (whether absolute fact or utter fiction) contains much philosophical and devotional material, such as a discussion of the four "goals of life" (right action, purpose, pleasure, and liberation). Among the principal works and stories that are a part of the Mahabharata are: the Bhagavad Gita (a sacred text outlining the key tenets of Hinduism), the story of Damayanti, an abbreviated version of the Ramayana, and the Rishyasringa, often considered as works in their own right.

The works of the Mahabharata was originally attributed to the scribe Vyasa. However, this lengthy, ongoing poem of mythical madness was most likely composed by several writers between the 8th century BCE and the 4th century CE (a mere estimation of the time frame). Perhaps this is why many people still question if it was fictional, factual, or a mixture of both fiction and fact; blah! To read more about it via the elaborate version, visit: http://en.wikipedia.org/wiki/Mahabharata

The reason why such a subject lands on this myths, legends, and folklore blog, is because the Mahabharata is a story of gods, demigods and men. Many people believe that the demigods and gods in this ancient manuscript were actually ancient astronauts who battled among each other for possession of this lovely blue planet known as Earth. In the past, I re-typed and/or copied a short story in which covered that very same subject, and it was entitled "Ancient Star Wars." ...And you can find it here: http://www.perpendicularity.org/star-wars.html

Did the writings within the Mahabharata provide grammatical evidence of atomic warfare, that occurred in our distant past? After reading the short story about ancient star wars, the weapons described in the Mahabharata didn't sound so primitive after all. It is an interesting concept to think about, to say the very least. Who knows for sure? Sometimes you're better off just using your creative imagination while leaving the rest for the pseudo-scientific creatures of today to pretend that they can unravel such things from ancient history... As the last part of the title asks: Fact or fiction??? Yeah, go get 'em, fellow brainiacs of ultimate knowledge and know-how... Either way, it sounds like this place has been under conflict, from the very start. Cheers! Ha-ha! 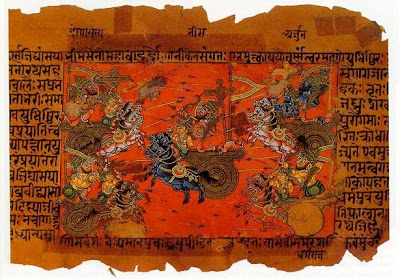 
Semi-related Post: "Beowulf - Fact or Fiction?"
Posted by Obscurely Diverse at 9:11 AM