Have you ever noticed some sort of lunar effect before? You know, the feeling you get at the brink of 'full moon' madness? Well, this is often considered a myth, but regardless, it is a debatable subject. First, I'll drop off some scientific dribble from wikipedia:

"Scientists have looked for a correlation between phase of the Moon and such things as murders, violent crime, or births. In particular, many police officers or emergency room personnel have noted a seeming rise in activity in their line of work during full Moons.
The lunar effect is a pseudoscientific theory which overlaps into sociology, psychology and physiology - suggesting that there is correlation between specific stages of the Earth's lunar cycle and deviant behavior in human beings. The claims of a correlation of lunar phases to human behavior do not hold up under scientific scrutiny. Over the past 30 years, even more evidence has emerged to stress that this is pseudoscience." Read more... http://en.wikipedia.org/wiki/Lunar_effect

Anyway, many creatures on Earth, for example, prefer to mate during a full moon. Without scientific babble, hogwash, and technical data full of procedural errors, I'll ask: Is this simply a man-made myth or does the full moon have lunar effects that is like no other?

I think this query is left to the obvious, the part of the body/soul/brain that can actually feel without thinking. I mean really, when people think too much about certain things or get into a science-related frenzy, everything often becomes cloudy.

To me, there is a lunar effect that alters the energy level at ground zero. It has been proven that a full moon raises the positive ions in the air albeit the negative ions is often promoted for the so-called betterment of moods, hence the possible madness that occurs during this particular occurrence. People often forget, scientists included, that the alignments in the cosmos are very powerful forces that can alter practically anything - in a whim. Personally, I see no reason to consider this a myth, even though I have read many statements via cyber-space, that try to debunk this possibility of actuality; but, if I may add, the attempts of debunking this "lunar effect" were all done in a poor fashion that lacked cognitive reasoning & feelings.
I enjoy science, but sometimes, it is just plain stupid and merely retards awareness.

Well, if anyone has a solid opinion about the full moon madness myth and/or the lunar effect, feel free to drop it down into the comment field. Speaking of the moon, that sucker is slowly drifting away from Earth at an estimated 2 inches a year or thereabouts.

If you're curious about finding reading material regarding this interesting subject, visit: 'Lunar Effects' - Books 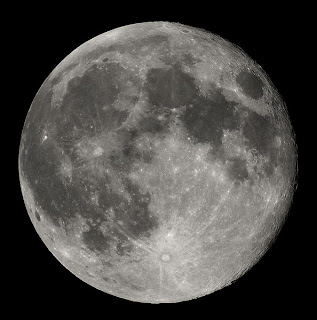 Posted by Obscurely Diverse at 12:33 PM