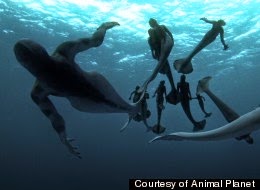 I've been hearing a lot more about mermaids the last year and a half or so, especially since the Animal Planet first aired the show "Mermaids: The Body Found." I actually missed that show, but I heard all about it. Well, tonight the Animal Planet had a show that sort of acted as a sequel to that, called "Mermaids: New Evidence" or something like that. I'm not a big fan of television nowadays, so I might not be totally accurate on my TV titles, etc. Anyway, it was interesting to watch, nonetheless. They are trying to merge the lame "aquatic ape theory" (in actuality, it is a hypothesis) with their mermaids gone wild flicks. This theory/hypothesis involves human evolution, which deals with certain ancestors of modern humans that spent a great deal of time adapting to a semi-aquatic lifestyle. During the show, they used weak aspects like saying humans are the only mammals that can hold their breath for a long time like dolphins and how we still have traces of webbed hands. I find that odd, for me anyway, because my large hands are far from being webbed; I can't hold my breath for several minutes and when I get in water, I act as a sinker and I also suck at swimming. Then again, I'm a so-called extraterrestrial so I guess I don't count, blah! LOL!

Anyway, back to this Mermaids Gone Wild thingy... They did have some interesting video footage (not the computer generated crap). One of the coolest videos was shot not too far off the coast of Greenland. There was another cost guard flick, and another involving a cell phone video camera. I don't know how many of y'all seen that show tonight, but I like how toward the end of the show, they quickly ran a bunch of flashing credits talking about fictional characters, disclaimers, etc. Dang, who can tell what is real anymore? There is always the possible motives for better TV ratings, money and so on, involved. Concerning this subject, I can't rule out the possibility that there is some semi-humanoid swimming around with webbed hands and a wicked tail, especially since the ocean is so vast and we do discover new species of life all the time. Plus, there are so many myths & legends involving mermaids, it does make you wonder. However, they need to just drop that aquatic ape theory and just concentrate more on the live video footage and camera shots, even though they can be faked, as well.

After thinking about this, I guess a mermaid would have to jump up in a boat with a fisherman and have a conversation with him, for this to be proven. If they do exist, though, I doubt if they are pretty like they are often described in mythical tales. Plus, there would be wild mermen, as well. That's all we need when going boating or fishing, is some crazed merman that is mad at his mermaid while having ego issues and drinking like a fish; ha-ha!

---> 'Click Here' to search for DVDs related to Mermaids
Posted by Obscurely Diverse at 12:37 PM