Even if you don't live in Tennessee, many of you have heard about the infamous "Bell Witch" that ultimately imposed a baleful attack on John William Bell, from Robertson County, Tenn. This particular legend will leave a person thinking and wondering, just what in the hell is out there that you can't see. Below, I'll provide some resource links and, in case you're interested in seeing this flick, a link to "The Bell Witch haunting"...

This ghostly, malign legend is downright eerie, and this sinister tale is almost always told as a "true story"...and it very well could be. I'm not going to doubt it; I don't want that crazy, wicked witch coming to see me. :(
For further proof, about the possible reality of this nefarious entity, former President Andrew Jackson is quoted for saying, "I would rather face the whole British army, than face the Bell Witch again!" Some critics think it is all a big scam - to make money off of folklore, but hey, there will always be criticism seeping through the woodwork - out to aimlessly tear down anything for personal gratification - due to self-loathing issues.

Anyway, to read a short story about this maleficent creature, click here. It is a short, descriptive tale that talks about the "Bell Witch" from Tennessee, and this evil entity's attack on John Bell and his daughter Betsy, along with John's family & friends.

Wikipedia's wicked version: According to the legend, the first manifestation of the haunting occurred in 1817 when John William Bell, Sr. encountered a strange animal in a cornfield on his large farm in Robertson County, on the Red River, near Adams, Tennessee. Read more... http://en.wikipedia.org/wiki/Bell_Witch_Haunting

Excerpt from the back of this DVD: "In 1817 something came to rural Tennessee. They thought they could rid themselves of it. Four years later it left; after it had committed murder!"

I own this DVD (The Bell Witch Haunting) and I enjoyed the film. Some people may complain about it being a low-budget production. But to me, that is something that made it even better. With the iniquitous plot about this legend...being portrayed by common southern folks in a low-budget film, it helps keep the viewer focused on the ghost-like, spiritual story at hand. Besides, the "Behind the Scenes" footage and 'bonus features' option, provided a lot of additional, wicked detail...... 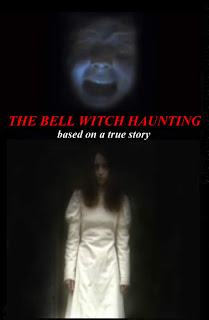 The spiritual realm can be a spooky place, by this story's claim. Look out for what you can't see...