Since this blog hasn't been updated in a long while, except for the post I did today (Dream Catchers & Witch Balls), I thought it would be a good time to do a popular post entry.  This is where I dig up a bunch of old traffic stats, and see which posts have been visited the most.  To make it easier, I'll just do a top 5 list, below:

1) Incas - Sky Gods - was in the lead by a large margin at #1.  I never understood why that relatively simple, short post got so much traffic.  I suppose that either a lot of people are curious about the Incas or perhaps just have a thing about Sky Gods, who knows?

2) The Legend of Mel's Hole - is a humorous post about an asinine legend.  Some people really take Mel's Hole serious, while I can't help but laugh.  There for a while, it was getting the most traffic, but over time it slipped way down, although it still came in 2nd.

3) Poseidon - The Flood - Athens - is a post that received a decent amount of traffic during the last few years.  It is a shame, though, because I wasn't very elaborate on that post and, really, it just wasn't very good.  It was an old "filler" type entry I did on the beginning when starting this blog, and had no idea that many people were interested in Athens or Poseidon.  I can see searching for ancient flood stories, myths, etc., as I meant to do a post about ancient floods, but never did.

4) Mermaids - Aquatic Femme Fatales - is one of those posts that just set there for a while, then all of a sudden started getting a fair amount of traffic.  Thanks to the fictional documentaries about Mermaids on the TV Series known as Animal Planet, it helped arouse the interest of many folks that normally wouldn't be searching online about mermaids.  Oh, by the way, I'm still waiting for those real life stories about mermaids, in the comment field...  LOL!

5) Mysterious Pyramids of Giza - comes in at 5th place.  Although this blog has a lot of interesting stuff on it, most of them didn't make the list as far as traffic is concerned.  However, it comes to no surprise that many people are still out there searching and reading about the ancient pyramids from Egypt.

Well, there you have it.  For whatever reason, those were the top 5 most popular posts for 2012 - 13.  Hopefully, in the distant future, I'll have time to update this site with some fresh content that relates to myths, legends, and folklore; cheers! 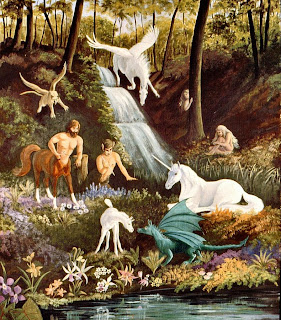